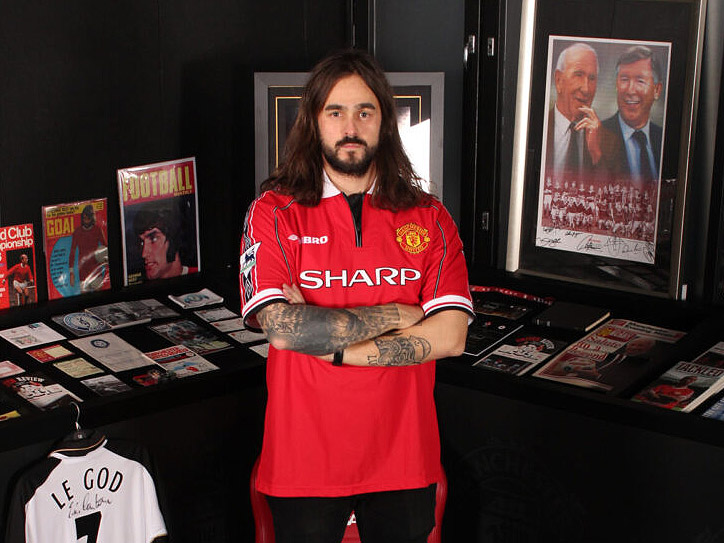 Hundreds of Red Devil shirts, the real benches of Old Trafford on which even Cristiano Ronaldo has sat, not to mention, 33 000 other Manchester United items such as scarfs, game tickets and fidget spinners are all found in Finland. What, in Finland? Yes, in Finland and more precisely in Helsinki Red Room, – the private Manchester United Museum. Let´s have a short tour in this holy place and our guide will be the one and only Jere Virtanen, – who is responsible for all of this…

(Jere on left playing against SUBER Minna on right)

In front of the door of Red Room

First of all, we wanted to know something about Mr Virtanen. We heard that the best way to break the ice was to talk about football so we did.

“Jere why are you so passionate about Manchester United since isn´t that the second-best team from Manchester? We don´t support anyone but we can see the current trend.” – SUBERTEAM

“Haha, are you trying to compare us to the noisy little brother? Not a chance. Manchester has always been, is now and will always be RED! Form is temporary, but class is permanent.  They might have a good run now, but that doesn’t change the history. The gap is massive between the clubs. But anyway… my love with United started when I was five and started to play myself. I chose number 7 thanks to Robbo (Bryan Robson). After that there has only been one club for me. “ Jere

It sure was an ice-breaker. Now anything we say will not top that one. So, we decided to ask something about Liverpool.

“Yes, so United is currently second in the Premier League so which Liverpool F.C player would you take to Red Devils´s starting line-up in order to actually win some trophies again?” – SUBERTEAM

“Oh well well… You are talking about the team which is currently in the worst home form of their history? The club which was 30 years without first tier trophy, won it during the pandemic year and is now becoming the worst title holder ever? The fact is I would never ever take anyone from that club to United. By the way… Phil Chisnall, who is the last player transferred directly between United and Liverpool, just died early this month. R.I.P. Phil. His transfer happened in April 1964, so don’t hold your breath for the next one to happen anytime soon.  “ Jere

Entering to this room we were mesmerised about everything and we could feel that we have arrived into a sacred place. A place where something bigger must have happened before! This room proves that a football club is more than just a “ball-kicking team”. It is a BIG family and a heritage. A way of life passed down from generation to generation. Therefore, even today´s kids know the goals of Eric Cantona very well. The club/fan connection is a friendship, a camaraderie which can turn into deep love. We can all agree that the power of football is immense whether or not a Citizen enjoys reading about the great deeds of Manchester United. One should still appreciate the commitment of Jere to Manchester United. Hundreds of game shirts including the one of George Best is not something that every football fan has… Not even a super fan.

While looking at the photo in which Wayne Rooney was about to score a bicycle kick goal, a critical question came to our mind…

“Jere what is your story with the club? When did you fall in love with their game?” SUBERTEAM

“As I mentioned before, it all started when I was around five years old. But when it became this deep and crazy… hmm… I’d say when I started to read more and more about the club´s history. Then I kind of started to really feel the size and the meaning of the greatest club in the world. Of course, when I started to go to see matches live, it became even more important. I’d still say that the last piece of the puzzle was to start getting friends around the world within the Red family. Then I understood this is bigger than sports. It’s a religion.”Jere

“Oh, we meant subsoccer club. The club we just invented! Why do you love subsoccer so much?  We can see our table over there so how would you describe your experience with the game so far.” SUBERTEAM

“Subsoccer F.C. Not a bad name for a club! Who is the manager? Jarno? That might end up bad, haha! I have to say that I love to play subsoccer. It normally starts by saying  “let’s just play one game”. Then your sweating and swearing for the next 15-20 minutes. It just drags you in and you have to win the next one… and then the next one. Why would you play if you don’t want to win? You should always play to win. ”Jere

“Great to hear. By the way if some die-hard United fans from Newcastle wants to come to have a visit to this awesome museum where can that person book tickets” SUBERTEAM

“Oh, from Newcastle! Good to hear. Fellow Reds are always welcome! The museum is a private one so there is no booking system to visit. I suggest that people go to www.helsinkiredroom.com or to our social media channels via (@helsinkiredroom) tag and contact me. We will figure something out! ”Jere

Love for our football-shaped planet

“Something nice about Liverpool F.C.? That is as impossible as claiming that Manchester City has fans, or Leeds is a big club. I don’t think it is possible. What if I say something nice about liver (as food) or a pool? I like to eat liver as medium rare. I also like to swim in swimming pools… if the water is enough warm of course. Is that enough? Now it’s your turn. Say something nice about Teqball! I heard it is the best new innovation in the world of football for years.” Jere

“Hahaa we understand. Maybe Liverpool will slowly grow in you… Something nice about Teqball? No problem. The game is amazing, challenging and good form of exercise. (if you are teq). However, most of us are not teq, freestyle football champions or Ronaldinhos with our feet so we will stick with sitting and kicking which is actually fun for everyone. Even for our Original Suberman, Jarno, who likes his football hot and his sodas even hotter. Yes, he has a very particular taste with soft drinks / SUBERTEAM